The Swabian Farm Museum Illerbeuren is the open-air museum for the administrative district of Swabia which extends from Oberstdorf in the south to Nördlingen in the north.

The open-air museum occupies over 30 acres featuring over 32 historic structures, including homes, barns, stables and commercial and civic buildings.  Some of these buildings have been in situ, some are reconstructed or rebuilt.

We recommend arriving early and planning to stay for a couple of hours. A visit provides an opportunity for everyone to experience the domestic, rural and commercial activities that supported families and communities for more than 300 years. You can see historically furnished interiors, explore museum exhibits and learn about the history and culture of this region, called Swabia.

Our staff provides guided tours and the museum also presents and hosts events and special programs throughout the year. 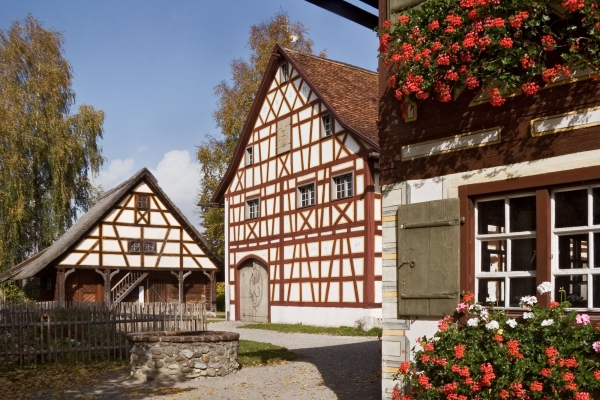 Due to current reasons the Swabian Farm Museum will be closed until further notice. The Museum is following the guidelines of the Bavarian State Government.

1st March to 30th of November

In winter the museum is closed. 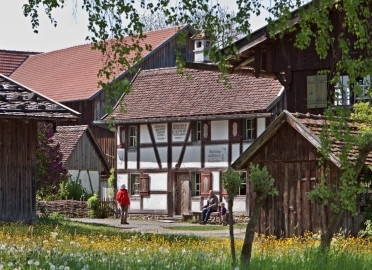 Severel car parks are located in Illerbeuren and are for free. Disabled parking spaces are available near the entrance. Follow the signs.

The bike path along the river Iller between Ulm and Oberstdorf leads through Illerbeuren.

The bike path Allgäu cycling circuit leads through Illerbeuren, too.
Planning the route over the Website www.allgaeu.de/en/cycling-allgaeu

A E-bike charging station is located at the town hall of Illerbeuren opposite the entrance of the museum.

Taking the railway (DB) until Memmingen, then taking the regional bus, getting off at the stop “Illerbeuren school” or “Illerbeuren fire department”. It’s a five minutes' walk to the entrance of the museum.

Sometimes the bus does not drive through the village Illerbeuren. Then get off an the bus stop  “Lautrach Abzweigung Illerbeuren”. Crossing the river Iller over the bridge, you come directly to Illerbeuren. It’s a fifteen minutes walk to the entrance of the museum. 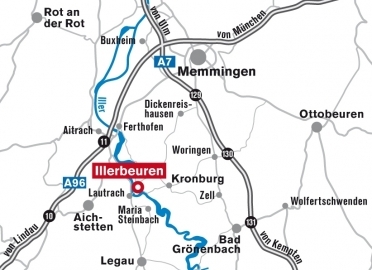 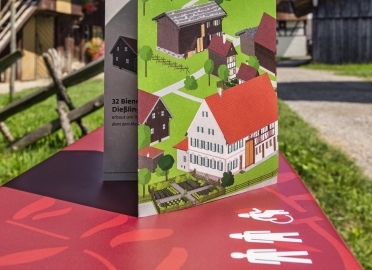 An exciting tour through the Open-Air-Museum.

During the tour through the museum for young and old you learn how people used to live in the old Swabia. You get a look into the historical buildings, learn about agriculture and traditional farm animals.

For booking a guided tour call

or write an E-Mail to info@bauernhofmuseum.de

We’re here to help you!

We are looking forward to your visit! 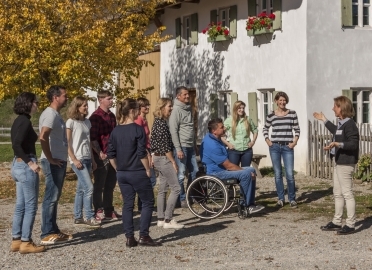 This building is a farmstead built on the site. It houses the museum's restaurant and the Museum's entrance with ticket office. You’ll find Swabian delicacies or "schmankerl", culinary delights and seasonal specialties.

This house was originally located in a peat bog near Jettingen-Scheppach (between Ulm and Augsburg). There were many people working in the peat bog to cut and dry the turf on the spot. The dry sods were used for combustion in engines, or for burning them instead of wood in the oven. These people could get a meal in the Torfwirtschaft pub. The lunchroom also got very popular for people from the town during weekends to spend their leisure time in the outback with a cool beer and a good snack.

The pub is divided into the restaurant and the living area of the tenants. There are several paintings with romantic scenery and the interior walls are decorated with a stencil pattern of different colours frequently used in the 1920s.

The bowling alley close by comes from another place but completes the ensemble for leisure activities. There is also a beer garden, and even today fresh beer and simple meals are served there.

The toilets in 8a/restaurant, 14, 19a and "Middle Swabia" are also accessible to the disabled.

This is a small farmhouse with furniture and objects of utility collected during the early beginnings of this museum in the 1950s.

In this house, there is an exhibition of land machines on two stores. The development from the hand drawn plough to modern machinery is presented and actual developments in industrial agriculture are discussed. 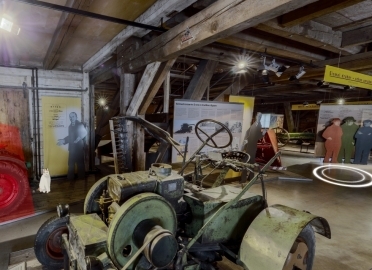 The museum opened in 1955 and was therefore the first open-air museum in southern Germany. Despite its long history, the museum is undergoing continual expansion which has been made possible by the purchase of additional land. The open-air museum shows primarily the rural built environment, namely furnished dwellings and farmyards, but also special collections of objects, topical exhibitions and much more that contribute to understanding rural cultural history.

Since different house types have emerged in different parts of the Swabian countryside, the Farm Museum presents its buildings in different groups which form typical settlements.

Beside the buildings which have been grouped according to region, one group has been formed in which the technical rural buildings of the 19th and the early 20th century can be seen. The “Old Museum Village”, which is not divided according to housing landscape but in situ, forms its own group of buildings. Not only does each building present information about its own history but also tells about the life of its residents throughout the centuries. Flax processing, rural clothing, agricultural and forestry equipment, milk processing, the storage of supplies, historical equipment and much more is on display. 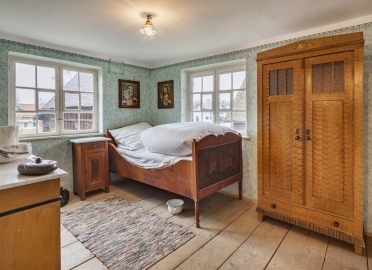 Not only does the Farm Museum show furnished houses on its premises but it also grows types of old horticultural crops. In the Middle Swabia group of buildings there is an area that is dedicated predominantly to the growing of cereals. The fields are farmed according to the improved three-field crop rotation system. Traditional cereal, root crops and flax are grown in the Museum’s fields and around the “Middle Swabia” buildings.

There are eight delightful gardens at the Museum. The kitchen gardens that belong to the houses are a major attraction for many visitors due to the variety and mixture (vegetables, flowers, medicinal herbs) of the crops that have been grown in these small domains. Each garden containing the herbs, vegetables and plants that would have met the needs of the rural household.

We grow several heritage varieties of vegetables, like parsnip, chard, carrots and beans.

Swabia is all so an orchard paradise. In between you see growing over 100 varieties of heritage fruit trees, apples, cherries and plums.  Unique attraction is the trellis (treillage), an living architectural structure. The museum shows how to train apples as espaliers for a space-saving way of growing fruit on a wall or fence.

There are “Zaupelschafe,” a very old Swabian breed of sheep that is otherwise extinct in Swabia nowadays.  The museum also owns some “Oberländer Noriker”, cold-blooded horses which were used to cultivate steep terrain in Alpine regions.”.

Visitors, too, can find the “Schwäbisch-Hällisches Schwein”, a pig descended from the Celtic-Germanic pig and the “Allgäuer Original Braunvieh”, cattle that were once common in the foothills of the Alps. The "Augsburger" is a very rare breed of poultry, that was developed in Augsburg, Bavaria in the 1880’s. The "Augsburger" comes mostly in a black color-variety. The bird has a red face, white earlobes and slate-blue legs. The most unusual trait is the comb, it looks like a crown. 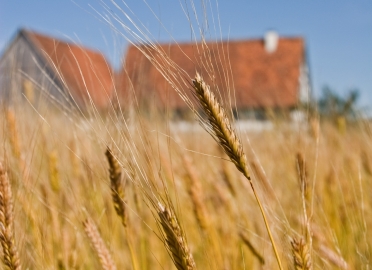 In the pottery you experience how to create dishes by hand. At different times during the season you can watch Craftsmen at work for example process flax, forge or baking bread. Our farmer work with horses or old agriculture maschines you can watch. 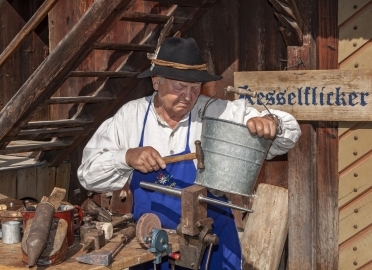